There are some new features for the stopwatch and the associated displayed current timestamps: For example, the stopwatch can be hidden individually by each user now, if he does not need it. (In the settings this was possible only for all participants of the time and attendance up to now.) The current time records now can be edited directly on the stopwatch page without the need to change to the time sheet.

The import of time data from Apple's calendar application has been improved. Calendar data in the iCalendar format can be imported into the time and attendance System for a short time. This import is steadily improving, but is still in beta. We thank all the testers and still ask you for feedback and suggestions.

Data from the project time tracking can now be exported for any period of time. So far this was only possible weekly, monthly or yearly.

Own time zone for each user

The ability to adjust the time zone for the entire time tracking system has been established already in the settings. For international teams now each team member can be assigned to its own time zone. Simply untick the 'Use time zone of the settings' option for the corresponding user and select an individual time zone.

iCalendar is a computer file format for exchanging calendar content. The iCalendar format is widely spread and used, amongst others, by Apple's iCal and Google Calendar. Possible filename extension for iCalendar files are: .ics, .ifb, .iCal, .icalendar or .iFBf. You can now import calendar data and working time entries from these applications directly into the Goodtime time tracking system. The import is still in beta version - we ask for feedback and suggestions for further refinement.

Several minor changes and new features have been implemented. For example now not only IP addresses but also domains can be used to restrict access to the time tracking system. On of the most obvious changes concerns the working hours statistics. The charts for the annual view has been revised and now show not only the monthly values, but also an overview of the daily working hours throughout the entire year. 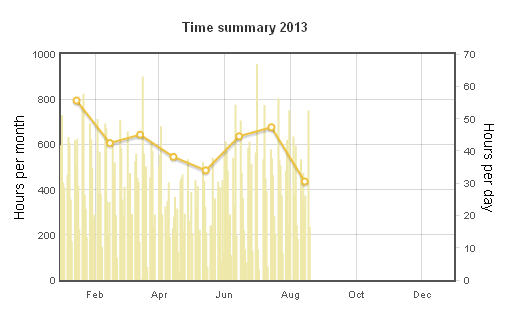 Invoice without VAT for customers from Switzerland

Invoices for our customers from Switzerland so far included 20% Austrian VAT. Due to changed tax regulations the invoices to our business customers in Switzerland include now no more VAT.

The date selection for the time reports (time sheets) has been revised: The change from week to month view is now more clear and two additional forward and backward buttons facilitate quick changes between adjacent time periods. The existing options (e.g. selection of the week and the month) remain in effect and work as usual.

New selection of the timesheet

The selection of the timesheet for a particular employee is even easier now: The time reports can now be selected for display directly in the "timesheet menu". For companies with many employees, the previous selection is maintained, respectively the selection mode adapts to the size of the company automatically.

The main menu of the time tracking system has been redesigned: Now drop-down entries result in more clearly represented menu tabs. The basic design has not been changed significantly: For administrators and users with manager roles some menu entries are merged under the menu item "Administration".

The Goodtime website has been redesigned: The goal of the redesign has been to improve the ergonomics of the site for optimal display on devices such as smartphones and tablets. We hope you like the new website and look forward for comments or suggestions to the

The technophile among the Goodtime users likely have noticed it anyway: The time and attendance system is running on a new server! The number of users is increasing constantly, and at peak times the old hardware gradually exceeded its performance limit. The move to the new hardware has been performed "on the fly" without restriction of the time tracking service. At this point, once again many thanks to all involved for your efforts and the great work!

The Excel export for working hours and project time has been revised. For example the exported data is now better suited for internal calculations. So own analyses, statistics and charts can be created more easily from the exported data.

The Help for the settings for the time and attendance system has been revised and expanded. Now the appropriate help links guide more quickly to the correspondent descriptions of the settings.

The role of the administrator can now be passed on to another user: The admin role is always assigned to the first user of the online time tracking - so he who initially applies to the time and attendance system. So far this role could not be changed (in contrast to the other roles). Now the administrator can give his admin role to one of his colleagues. This is possible in the User menu in the Permissions tab of the current admin. Only the administrator can release its own role, and still there may be only a single administrator for the timekeeping system. Please apply this new opportunity wisely.